Will Feds Take on States in Trucking Jurisdiction Fight? 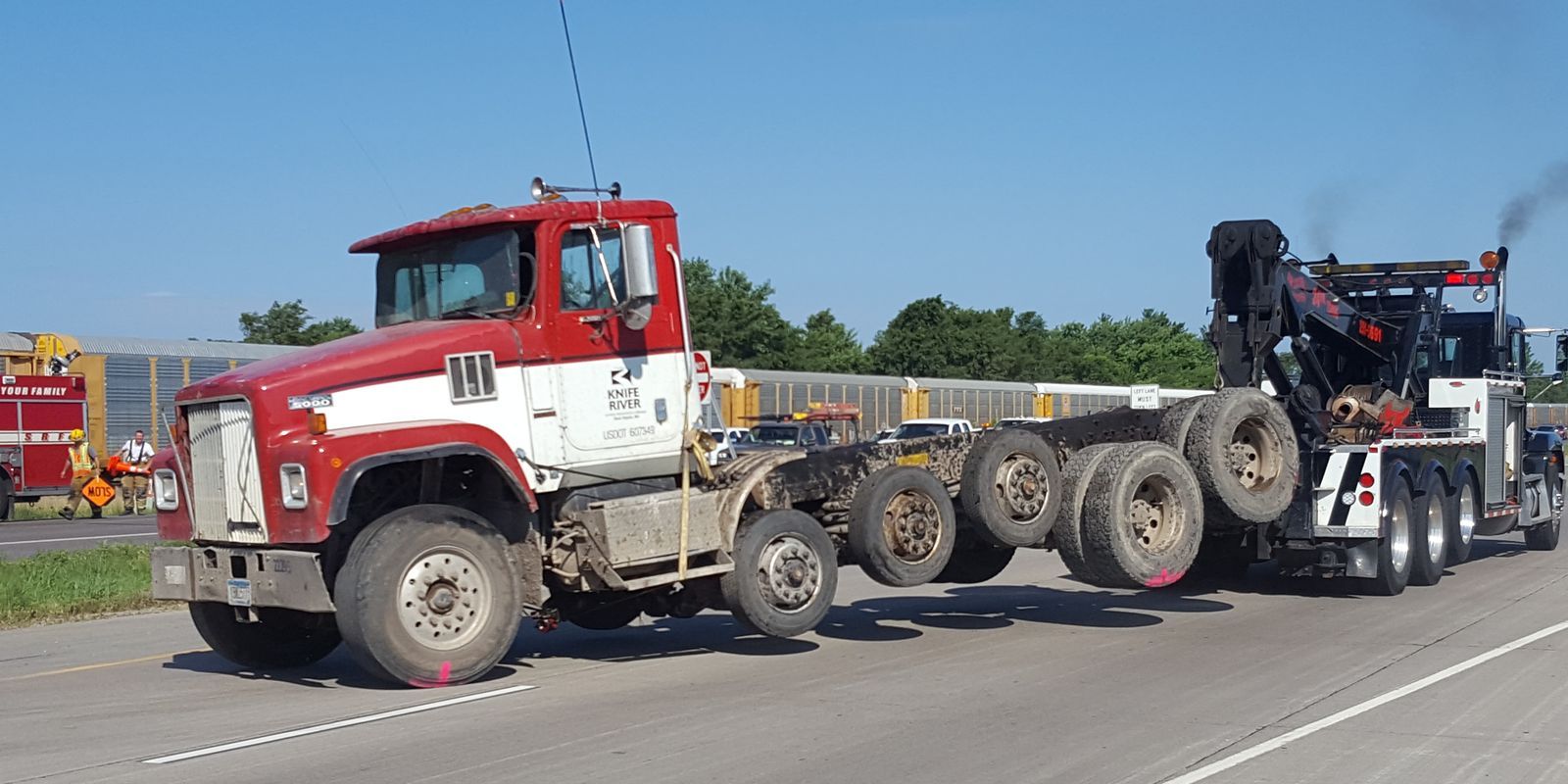 When a passenger jet takes off from a U.S. airport, virtually every rule and regulation governing its flight is in place regardless of where the domestic flight lands.

But when a truck leaves a port or distribution center, it can encounter a patchwork of regulations that govern how much the driver will be paid, the big rig's total weight and its emissions. Unlike air transport, states can determine many rules that govern a semi-truck's operation.

But all that could change amid efforts to pass federal legislation seeking to preempt certain state-specific regulations. Such efforts are part of an ongoing tussle between local and national stakeholders over jurisdiction of the industry.

Some, like the Owner-Operator Independent Drivers Association trade group, say that one-size-fits-all policies favor powerful industry interests at the expense of safety. Others, like Joe Rajkovacz of the Western States Trucking Association, say a hodgepodge of state rules expose employers already squeezed by tight margins to a domino effect of confusion and expensive lawsuits.

"Potential industry re-regulation is the only way to alter the overall economics of the industry to meet the economic utopian worldview of those who support allowing state interference with interstate commerce," Rajkovacz said.

The U.S. Constitution authorizes the federal government to administer laws related to interstate travel and commerce, such as one requiring truckers to take a 30-minute rest break following eight hours of driving.

But states oversee transportation within their own borders. More than a dozen have implemented trucker labor and weight rules that differ from nationwide standards.

California has the most generous hours-of-service standards. With some exceptions, truckers are promised a paid 30-minute meal break before the end of every five hours of driving atop of a 10-minute rest break every four hours.

That disparity doesn't sit well with many on Capitol Hill. Many proponents of federal preemption are Republicans - a party that historically supports the ability of states to establish their own rules on such diverse issues as union organization, abortion and voter identification.

One version of a Department of Transportation advanced out of a House subcommittee in July features a plan to override states' trucker break rules with federal regulations.

Amendments to preempt state rules about trucker hours of service with federal mandates have now been floated before Congress for the third time in as many years.

Rep. Jeff Denham (R-Calif.) first introduced the amendment in 2015 as part of the FAST Act highway bill, but it was edited out of the final version. The amendment re-emerged a year later in an unsuccessful bill to reauthorize the Federal Aviation Administration.

Denham hoped to bar states from carrying out laws forcing carriers to pay compensation beyond an existing per-mile or piece-rate basis, including for non-driving activities such as sleeping, loading or eating.

Supporters include the American Trucking Associations and the Western States Trucking Association. In 2015, more than 70 carriers signed an open letter supporting the amendment, praising its attempt to promote competition and market-driven efficiency and to prevent a 50-state patchwork of rules that would otherwise burden interstate commerce.

But those vouching for state-by-state rules say that local government is better equipped to move the needle on necessary safety reforms. Fatigue caused 1.4 percent of fatal crashes involving large trucks in 2015, according to data from the National Highway Traffic Safety Administration.

Centralizing control of break times and compensation is 'an ambitious overreach' and essentially an effort to blockade labor reform, according to a statement from the Owner-Operator Independent Drivers Association.

A nationwide blanket rule "could unravel mandated fair pay for drivers and would empower large carriers to further reduce driver wages," the group said. "It would also gut the ability for states to address critical items like payment for detention time."

Nearly half of owner-operators wait more than 11 hours a week to load and unload cargo, according to OOIDA. Much of a trucker's day is spent stagnant, passing through inspections, completing paperwork, refueling and conducting repairs, according to Riverside, Calif.-based law firm Fernandez & Lauby.

Drivers use up an average of 35 hours a week doing work for which they aren't paid such as waiting at loading docks waiting for goods to be loaded or removed from trailers, according to trucker advocate Allen Smith, who spent years as a driver before launching the popular 'Ask The Trucker' blog.

"The trucking industry is petrified that they will be forced to pay drivers for all time," he said.

Federal preemption was initially established in 1994 as part of the original FAA Authorization act, according to employment attorney Anthony McClaren in a 2016 article for ADLI Law Group.

The legislation determined that a state may not enact or enforce a law, regulation or other provision having the force and effect of law related to a price, route or service of any motor carrier.

Though Congress implemented the measure "in an effort to streamline the patchwork of laws used by states to regulate motor carriers," McClaren wrote that "this incredibly broad statute has sparked deeply contested litigation."

One class-action lawsuit, from three drivers who accused Penske Logistics of underpaying them for meal breaks stipulated by California law, was settled by the company for $750,000 this year after spending nearly a decade in the legal system.

In 2014, the case prompted a landmark decision from the U.S. 9th Circuit Court of Appeals, which ruled that Penske must pay drivers for breaks in states that require it.

Walmart Stores also faced a similar suit in 2008, with truckers alleging that the company broke California law by not paying drivers for time spent on breaks and inspections. A jury awarded 850 drivers $55 million in back pay in 2016, but the plaintiffs' request for an additional $80 million in penalties was struck down by a federal judge this year.

"Any company facing the barrel of a claim that invokes the [FAA Authorization Act] need be prepared to endure significant and protracted litigation, and may perhaps, with sufficient resources and intestinal wherewithal and fortitude, be able to prevail by simply outlasting their opponent," McClaren wrote.

But allowing states to set trucking hours-of-service standards could open carriers, especially smaller companies, to a domino effect of frivolous lawsuits and legal extortion, some said.

"We absolutely need federal preemption laws to stop these money grabs and the other 50 shades of interference by the states," said Jeff Tucker, chairman of the Highway Transportation Committee for the National Industrial Transportation League trade group. "When states interfere with interstate commerce, it's bad for business, consumers and is impossible to manage from a compliance standpoint."

Many drivers want to control when they break from driving, but state regulations like California's force truckers to rest and eat at inopportune times, Rajkovacz said.

And having a hodgepodge of different mandates scattered across the country could confuse drivers who must cross multiple state lines a day, Rajkovacz said. Small carriers especially could be left in the lurch.

"When unilateral changes occur in long-standing industry practices, smaller entities generally find out when they get served papers announcing they are being sued," he said.

Trucker advocate Smith counters that drivers can choose to waive their rest breaks while still being paid for them and also scoffs at claims of inconsistency.

Some in the industry want to raise the maximum from the 80,000-pound level set in 1982 to 91,000 pounds argue that a uniform measure nationwide helps make commerce more efficient.

The Senate Appropriations Committee passed a transportation department funding bill in late July that would, in part, allow for heavier trucks on interstates in North Dakota and New Hampshire. Amendments from Sens. John Hoeven (R-N.D.) and Jeanne Shaheen (D-N.H.) would boost maximum truck weights to 129,000 pounds and 99,000 pounds for certain roads in their respective states.

The argument for a higher national standard is this: Trucks would be able to maximize the space in their cargo holds, leading to better fuel and emissions management and fewer trucks on the road. Drivers with heavy loads would be able to traverse federal lanes instead of maneuvering through rural state and country roads, where the majority of fatal truck crashes occur.

Logistics expenses would fall by $5.6 billion annually, according to logistics experts for brewery Anheuser-Busch, a major trucker.

In May, more than 80 agricultural groups and shippers wrote to Congress proposing a 15-year pilot program studying the safety consequences of a 91,000-pound weight cap on federal interstate highways. The study would be included in the 2018 Transportation, Housing and Urban Development fiscal year appropriations bill.

But despite support from the likes of the American Soybean Association, a 2015 effort to increase weight limits via the so-called SAFE Act from Rep. Reid Ribble (R-Wis.) failed.

Opponents, including the OOIDA, say that heavier trucks would endanger other motorists and further damage the already delicate U.S. highway infrastructure. They also question whether efforts to raise the nationwide weight limit are a ploy to ask truckers to do more work for the same level of pay.

For now, it's unclear whether any of the current federal preemption clauses will be voted into law. And if the House and Senate approve bills with disparities, the language will need to be reconciled for consistency.

Rep. David Price (D-N.C.), the ranking member of the House Appropriations subcommittee on transportation, housing and urban development, said in a statement that he was "strongly opposed to several controversial policy riders' attached to the transportation funding bill that would, in part, harm labor rights."

The bill, he said, "faces many hurdles in order to garner bipartisan support."